Scientific and practical seminar on studying the strategy of Actions 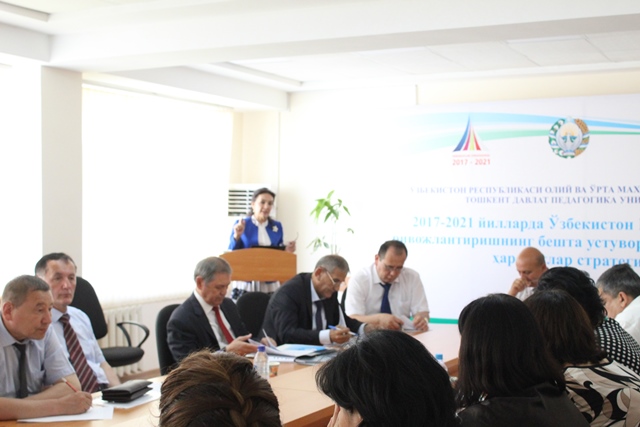 President of the Republic of Uzbekistan Shavkat Mirziyayev clearly identified the priorities for the next 5 years in his decree "dated on February 7, 2017 “About the further development of the strategy of actions of the Republic of Uzbekistan “. Strategy of actions sets exact and vital reforms and their mechanisms of their implementation for the development of our country. Particularly, focusing on the economic and social development, increasing the quality of education, ensuring the rule of law, ethnic tolerance, indicating the deserve attention for providing the main purpose of strategy of actions. On May 19 of current ye ar, studying five priorities of the strategy for the development of the studying of scientific and practical seminar of the Republic of Uzbekistan for the period 2017-2021 which was held in the University. The seminar was opened by D.Irgashev prorector of academic affairs of the university and expressed gratitude to the specialists visited the event. Distinguished leading professionals, experts and scholars of the country participated with their reports on the country's direction of the priorities of the five strategies. Moreover, Professor of development in the Republic scientific and theoretical basis of the five priority actions in the direction of the strategy of the Tashkent State Institute of Culture and Arts, Doctor of sociology M.Bekmurodov, Professor of improving the priority actions in the system of constructing the Government and Society , Doctor of Philosophy M.Qaxxarova, Professor of the rule of law and the priorities for further reform of the judicial system under the Ministry of Justice of the Republic of Uzbekistan Judicial Training Center, Doctor of Juridical Sciences I.Nasriev, Docent of the development of the economy and the liberalization of the priority actions of the Tashkent State University of Economics , candidate of economic sciences R.Hakimov, Professor of the development of the priority actions in social sector of the Tashkent State Economic University, Doctor of Philosophy, I. Soifnazarov, High School teacher in the sphere of providing security and tolerance mutually beneficial and practical in the field of foreign policy priorities of the Strategic Analysis and Forecasting, doctor of historical sciences I.Islamov and Doctor of Philosophy and strategies impregnating the minds of the youth the importance of methods and tools of the Mirzo Ulugbek National University, Doctor of Philosophy, Professor of N.Shermuxamedova trough their presentations properly explained the definitions about the meanings of actions’ strategy. At the end of the seminar, participants are satisfied with the received answers to their questions by experts and scholars. The participants were greatly impressed.